Trade is a means of exchanging goods between planets and stations, with intermediary participants sometimes (but not always) collecting a profit from the process. Players can participate in trade to earn credits, and making a profit from trade will generate experience as well.

For details of trade between markets, see Economy.

Trade occurs between markets, each of which can be a planet, a station, or a planet and its associated station. Different markets produce different commodities such as food, fuel, ore, metals and machinery, which are then exported to other markets that need them. Each market has a specified population, which determines the magnitude of its supply and demand for commodities, and a stability value that represents the amount of factors such as development and law and order on the planet. More stable markets have higher prices and fewer items on the black market.

The player can easily use markets to purchase needed supplies, fuel, ships and other items, and similarly sell acquired loot there, but buying goods from one market to sell at another is generally unprofitable. This is because every market imposes a 30% tariff on items bought or sold by the player, making buying more expensive and reducing the gains from selling them. The design intent is to prevent players from finding a single profitable trade route and then farming it continuously.[1] To get around this, the player must take advantage of events and missions, or make use of the black market.

The per-unit price of a good will rise as more items are bought in a batch, and fall as more items are sold. This is particularly marked if the number of units sold exceeds the market's local demand. Depending on the commodity in question, demand may be zero; e.g. many minor markets won't buy metals.

The items available on a market are refreshed every 30 days.

Events such as trade disruptions will sometimes occur, raising or lowering the price of commodities in a market by a large amount. During this period, it is economical for the player to trade in the affected goods.

If trade fleets are prevented from reaching their destination, or accessibility to a market is disrupted, it may experience a deficit of certain commodities. The player can often turn a profit from shipping commodities to markets.

There are two types of trade missions, Delivery missions and Procurement missions. Delivery missions require the player to deliver goods while the Procurement missions require the player to purchase the goods and deliver it as well. Both mission types must be done within a certain time period for a profit and a reputation gain. Failure to make the delivery in time will result in a small reputation loss.

If you are aligned to a faction and receive a monthly stipend/salary, your faction may go to war with other factions making Delivery and Procurement missions much harder to fulfill. Your final destination may have an enemy patrol nearby requiring your transponder to be on when entering their solar system or even worse requiring it to be on to enter a planet/station.

Some missions involve pirates that require goods and are hiding in a planet/station that only accepts fleets with the transponder turned on. However, the pirate requires your transponder to be off in order to accept the commodity and hide their identity. In these cases you need to use Go Dark and avoid patrol fleets before entering the planet/station. You cannot enter a planet/station when you are actively being chased by a patrol fleet so you may have to distract them by taking control of a Comm Relay, Nav Buoy, or Sensor Array to get them to leave their guard duty position.

A faction commission is required to purchase any item that also requires a Welcoming or higher reputation level, if the faction issues commissions.

Smuggling (i.e. trading on the black market) will cause the player to lose reputation with the faction operating the market, and can attract attention from nearby patrols who will search for contraband or suspiciously large volumes of supplies, crew or fuel. Having ships with Shielded Cargo Holds reduces the chance of contraband being detected. Trading on the open market at the same time as smuggling will reduce smuggling suspicion, and docking with the transponder off eliminates it. The suspicion level is visible as a tool-tip on the black market button. Free ports do not care about smuggling activity and will not receive a stability penalty from it.

Selling blueprints to the black market will cause the pirates to learn them after several months, and use that equipment in their fleets. This can significantly increase the game's difficulty, but can also be done to obtain a new source of recoverable high-end gear.

Unlike the open and military submarkets, the black market does not require the player to dock with their transponder active.

Black markets are not found on player colonies.

Trading with a faction will raise the player's reputation with that faction, but lower it with any enemies of the faction (other than pirates) that are present in the star system.

A higher reputation with a faction will reduce the chances of contraband detection and criminal investigations a player is subjected to, while a lower reputation has the opposite effect.

A faction at "inhospitable" relationship status will refuse to trade with the player or even allow docking for refits/repairs. However, a fleet with its transponder off and undetected by any patrols can sneak in and trade on the black market. Independent and pirate markets will also allow open market trading if the transponder is on/off.

Monitoring commoditiy prices to "buy low and sell high" can be quite profitable and not as time-consuming as finding trade missions from each faction's Comm relays.

Mousing over a commodity in the trade menu and pressing F1 brings up a list of the highest and lowest prices available. The player fleet must be in range of a comm relay to access this information. 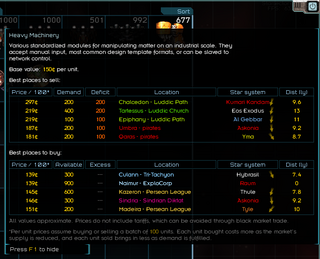 Below are some ways to optimize commodity trading:

Only up to date for version 0.9. It is likely still broadly correct but not verified for the most up to date data yet. Please double check the Version History

Retrieved from "https://starsector.fandom.com/wiki/Trade?oldid=13211"
Community content is available under CC-BY-SA unless otherwise noted.