Stations are large defensive structures in orbit around planets, or sometimes housing markets in themselves. They present a powerful deterrent to hostile fleets and protect their planet from bombardments.

The player can build a station for a colony using the provided industry. Pirates and the Luddic Path can also build stations (e.g. Pirate Base) in hidden locations, and the Remnants also have battlestations found in the far reaches of the Sector.

A station that loses some modules will replace them over time. If a station is completely destroyed in battle (by destroying all its armed modules), it will take 1-3 months to restore. A pirate base, Pather base or Remnant Nexus will be permanently destroyed.

Human-buildable stations have three types (Low Tech, Midline and High Tech) and three tiers (Orbital Station, Battlestation and Star Fortress). The different types function in somewhat different ways, but are designed to be balanced against each other. Each tier considerably increases the station's strength, adding new modules and other capabilities, with a fully upgraded station able to repel fleets with capital ships.

The basic station has two to three modules installed on a rotating platform, generally 1-2 gun modules and 1-2 hangar/missile modules depending on the station type. The asymmetry means the player should change tactics as the station rotates. The second level adds outwork-type modules to protect the main modules, and the third adds drones and a mine projector. Level 2 and 3 stations can also have ablative armor modules.

By default, stations do not come with officers (can be changed in the settings.json file). Adding an Alpha AI Core to a station gives it a level 7 officer. 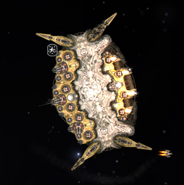 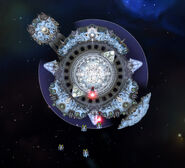 Pirate bases will generally consist of incomplete stations with two modules, unless given time to get settled in their hideout.

Stations are autofitted with a semi-random set of weapons (like other NPC ships), which vary based on the station type. They also have unlimited missile ammunition.

Only up to date for version 0.95. It is likely still broadly correct but not verified for the most up to date data yet. Please double check the Version History.