The Remnant Battlestation (fleet name Nexus) is a very large Remnant combatant that uses the new multi-part combat station mechanics. Its large central core is invulnerable due to the Vast Bulk hull mod, but its numerous small modules are destructible and the station itself will die when all modules are destroyed.

Remnant fleets will spawn from Remnant stations in the campaign, so if there's a planet that could be a very valuable colony, the Nexus will have to be destroyed first to ensure the colony's safety. However, one can also choose to leave the station alive and farm its fleets for AI Cores, or even provide a serious obstacle to even the most formidable expeditions. 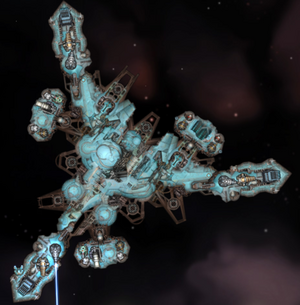 The damaged battlestation will have modules:

It has a mid-level officer.

The core has hull mods:

The lack of any shielding whatsoever and numerous unused module hardpoints make this station much less durable than otherwise. It is still capable of putting out notable damage although not enough to seriously threaten most capital ships or some heavy cruisers. Quite susceptible to massed torpedo strikes. 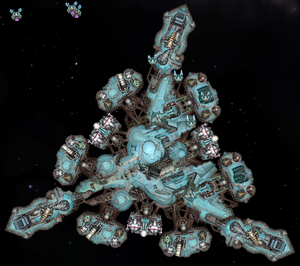 The fully operational battlestation will have modules:

It has a high-level officer.

The core has hull mods:

The amount of firepower and very brutal PD coverage necessitate a significant force expenditure. Do not attempt with insufficient forces as they can easily find themselves too far within the extended range of its capital-scale firepower to possibly escape.

These are wrapped around the outermost, unshielded, weapon platform 1s.

These are used at the far corners of the station as primary heavy weapons platforms. They neither have their own shield nor are covered by any other shield modules, leading to a vulnerability to HE damage. The mixed weapons package is effective against both armor and shields at extended range.

Quite a lot of burst damage.

Only up to date for version 0.8a-RC19. It is likely still broadly correct but not verified for the most up to date data yet. Please double check the Version History