"Red Planet" is one of the two "story quests" added in Starsector 0.9. It unlocks the Planetary Shield industry.

Sometimes, at a bar (but not on Luddic Church or Luddic Path markets, or "hidden" locations like pirate bases), you may encounter a "rough-looking veteran spacer with cybernetic eyes". Talk to them to hear about a deadly encounter by a salvage fleet in the far reaches of the Sector, of whom only the spacer and a pilot survived.

The spacer tells the player character to find the pilot on another market to get more details. Said pilot can be contacted on the comm board, where they will demand 10,000-20,000 credits to reveal the location of the Red Planet.

You can then travel to the location of the planet, readily identifiable by its red tint. Approaching the planet results in an encounter with high-level Remnant ships, including a Radiant.

After the defending fleet is defeated, examining the planet reveals that it was the site of a Tri-Tachyon research facility which the automated defenses placed on lockdown after they "over-weighed certain executive security contingency orders in the wake of one of the AI Wars". A shuttle from the player fleet is able to find a gap in the shield and deactivate it, after which you can salvage high-value equipment from the facility, including the Planetary Shield blueprint. 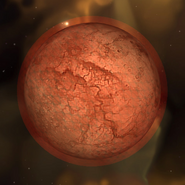 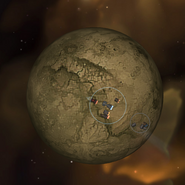 Retrieved from "https://starsector.fandom.com/wiki/Red_Planet?oldid=15823"
Community content is available under CC-BY-SA unless otherwise noted.