Hyperspace is the means of interstellar travel in the Sector.

To enter hyperspace a fleet must travel to and interact with a jump point, where it can then perform a jump into hyperspace. Fleets can exit hyperspace at jump points, or at the gravity wells around gas giants and stars.

The Transverse Jump ability is unlocked with level 3 Navigation Skill and provides alternate means of exiting hyperspace at nascent jump points near systems and also the capability to exit a system without the need of a jump point, at a small combat readiness cost.

Travelling in hyperspace uses fuel. The rate of fuel usage and remaining stores of fuel can be found in the bottom left unser interface element, which can be hovered over with the mouse for more details or hover & F1 to provide a detailed breakdown of fuel usage per ship. If a fleet runs out of fuel while in hyperspace it will drift towards the nearest gravity well and fall back into normal space there. If it is not an inhabited system then searching for Salvaging opportunities or using the Distress Call ability may provide enough fuel to get back to a market to purchase more fuel.

There are two types of jump points, proper two way jump points and one-way gravity wells, which act as de facto jump points to enter a system. Sufficient gravity wells for jump transits are formed on stars and gas giants; these points can only be used from hyperspace to jump (or fall) into a system. Regular two-way jump points can be used to both enter & leave hyperspace. Systems usually have at least two jump points; an inner jump point that usually shares an orbit with the system's major planet, and a fringe jump Point which revolves around the Sun farther out than the farthest planet, although exceptions do exist.

Hyperspace contains Deep Hyperspace zones, denoted by dark clouds. Fleets in deep hyperspace have half the sensor profile and are slowed in a manner similar to nebulae in normal space. They can make excellent ambush nests, provided care is taken to move when a storm starts forming.

Hyperspace storms cause periodic randomly storm strikes to fleets inside them. Strikes deal great damage to a randomly selected ship's hull, armor and combat readiness (but cannot kill the ship outright) and also toss the fleet a considerable distance through space. Larger fleets incur more damage upon a strike.

Plowing through a storm area can cost significant supplies; however a savvy (or foolhardy) captain may also deliberately fly into hyperspace storms in an attempt to get more speed.

Emergency Burn can be quite useful for ensuring a particular trajectory before or after hitting a storm, due to its high acceleration. Conversely, Sustained Burn is detrimental to control and should be disengaged when entering a hyperspace storm. Remember that storm strikes are more damaging for larger fleets and a large fleet might not be able to use Emergency Burn directly after a strike due to at least one ship having insufficient CR.

The costs of hyperspace storm surfing can be highly mitigated with the Solar Shielding hullmod or level 2 of the Safety Procedures Skill.

An example of a Deep Hyperspace zone. Brightly lit areas indicate a hyperspace storm in progress 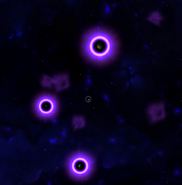 Only up to date for version 0.8a-RC19. It is likely still broadly correct but not verified for the most up to date data yet. Please double check the Version History

Retrieved from "https://starsector.fandom.com/wiki/Hyperspace?oldid=15059"
Community content is available under CC-BY-SA unless otherwise noted.