The Eagle is a midline cruiser with good all-around stats.

With its many front-facing weapons and front shield, the Eagle should be kept facing the biggest threats. Maneuvering Jets are useful for bringing your guns to bear or turning to cover weak spots in your defense, as well as for getting around. The Extended Shields hullmod still won't completely cover your six, but it will make the gap in your shield much narrower.

Plan your loadout carefully. A good combination is kinetic weapons (Heavy Autocannon, Light Needler / Heavy Needler or Railgun / Hypervelocity Driver) up front to overload enemy shields, coupled with beam weapons and/or a strike weapon such as the Harpoon MRM. You can also reverse the setup and combine Graviton Beams with a HE ballistic weapon such as the Assault Chaingun or Heavy Mauler, perhaps with Sabot SRMs for dealing with recalcitrant shields (e.g. the stock Assault variant). Leave some mounts empty to save OP if necessary. 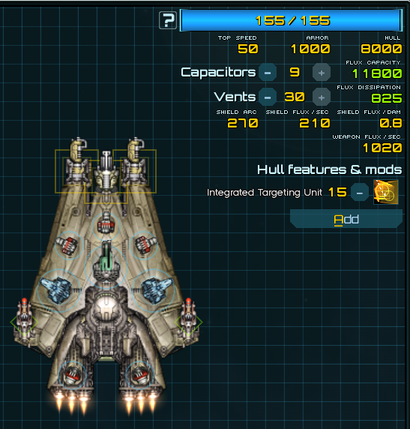 The Line Ship loadout exists in order to keep enemy suppressed and to make them unable to deal damage to your forces, with two Hypervelocity Drivers and single Heavy Mauler in its medium ballistic hardpoints as source of hard flux damage from all three, light EMP from Hypervelocity Drivers and light armor damage from the Mauler. Enemy is punished, does not matter if their shield is up or not.

Two Graviton Beams and singular Ion Beam in medium energy turrets match range with the weapons put into hardpoints. Gravitons provide constant kinetic damage at low cost, lowering enemy dissipation when hitting the shield (as beams deal soft flux damage, it is dissipated even with shield being up) which makes enemy more prone to fluxing themselves out. Meanwhile Ion Beam deals EMP damage if hitting enemy hull, while also being able to spawn a shield-penetrating arc, depending on enemy flux level.

Three LR PD Lasers in frontal small energies provide point defense for itself and allies ,while and two PD Lasers in the back cover the engines, keeping ship safe from Salamanders if enemy will be using them, as well as fighters, albeit with worse effectiveness against the latter. Integrated Targeting Unit increases weapon range by 40%. Weapon groups for this loadout are as follows: 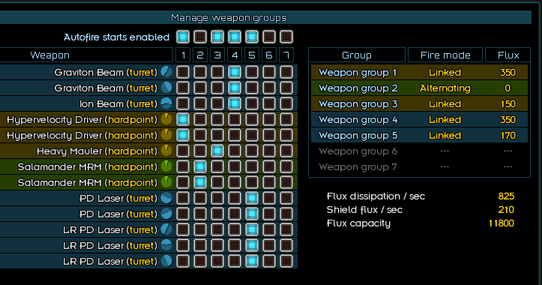