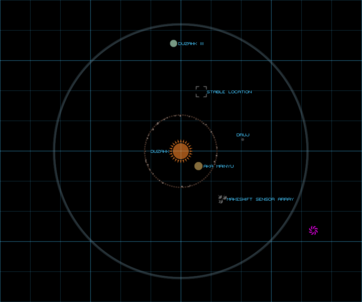 The Duzahk star system is an uninhabited system within The Core Worlds. It is located on the western-most side of Hegemony space, near Corvus. Similar to Penelope's Star and the Tia-Ta'xet binary system, it is completely uninhabited and unsurveyed.

Duzakh contains two stable locations and will always begin with a Makeshift Sensor Array constructed at one of the stable locations, owned by the Pirates. Otherwise, the system will start off with no other signs of colonisation.

Duzakh is guarenteed to contain an Orange Star, a Gas Giant, an Asteroid Belt, and a Barren world.

Duzakh is the sole star of the Duzakh system. It is an orange star

Aka Mainyu is the first planet of the Duzakh system. It is a gas giant. It very closely orbits Duzahk, and is thus inflicted with the Extreme Heat hazard.

The Daveas is a small asteroid belt with an orbit slightly larger than that of Aka Mainyu, centered on Duzakh.

Druj is the second planet of the Duzakh system. It is a barren world. It orbits a moderate distance past The Daveas, though is close enough to the star to be inflicted with the Hot hazard.

Druj is the last planet guarenteed to exist in the Duzakh system. Any additional planets are procedurally generated beyond Druj's orbit.

This jump-point orbits Duzakh. It is a considerable distance away from the star.

Retrieved from "https://starsector.fandom.com/wiki/Duzahk_Star_System?oldid=13096"
Community content is available under CC-BY-SA unless otherwise noted.